Ganimede the 113m yacht by Fincantieri

From Greek mythology to the sea: the Ganimede concept is based on ethereal, timeless beauty deriving from a combination of zoomorphic shapes inspired by the eagle and how it was represented during the Art Deco and Rationalist period. Streamlined, long lines have been used for the main volumes, stretching it out towards the horizon and creating a powerful contrast with the angular zoomorphic elements. The resulting effect is one of unique and original harmonious elements that are nonetheless contrasting: 113 metres of pure elegance and beauty.

The shape of the bow recalls the stylised profile of an eagle’s beak. This theme also appears, in a more or less obvious way, in the interplay of the full and empty spaces that make up and characterise the shape of the decks and windows. The outdoor area set aside for the owner has a large private lounge that connects the two prism-shaped pools. The helipad can be converted into a recreation area for the owner. The aft section of the main deck, which is very narrow and features zoomorphic stylistic elements, becomes a terrace that shields part of the beach club from the sun. 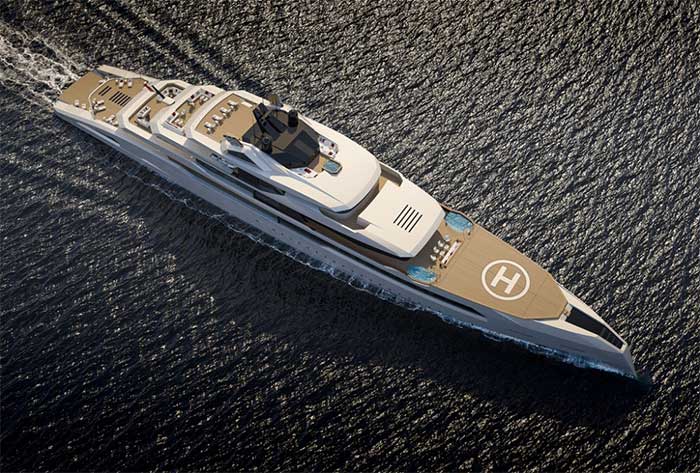 Touch of a garden

The yacht is boarded via the beach club which is over 20 metres long. That calls to mind a kind of monumental garden. It connects with the main deck by means of a stately spiral staircase, decorated in a typically Art Deco style and positioned in the centre. The pool is flush with the deck and has a waterfall, reminiscent of the typical water features of an Italian garden.

Ganimide is equiped with some envious caracteristics:

Get Free Update and News Directly to Your E-mail Inbox!