In this mini guide we will cover the basics of anchoring your boat and teach you how to select the type of anchor.

To anchor your boat you must first select appropriate point of anchoring (taking into account of depth, type of bottom and protection from the wind). We arrive on point of anchoring with a bow against the wind or against the current. We stop the boat and we put it in reverse. We start to lower the anchor simultaneously while reversing your boat. We are lowering the anchor with the same speed that we are going in reverse. When we lowered appropriate length of rope (3 - 5x depth of the sea) we tie it on the bow and pull the anchor 2 - 3 meters on the bottom. This should be enough for anchor to dig in. If it didn't dug in we repeat the whole process. Please note that tie on the anchor is not always reliable, even if we anchor with multiple anchors. We never anchor our boat on waterways, corridors, canals or places where anchoring is prohibited. 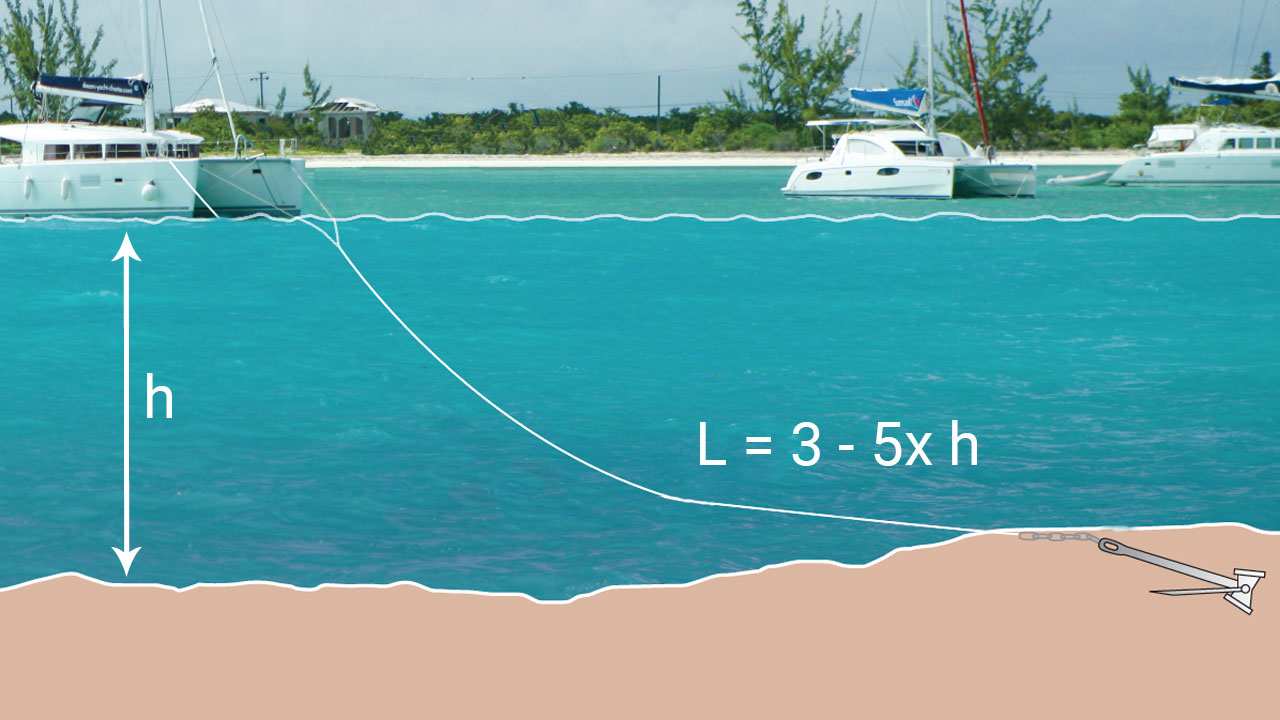 dIron was introduced for the build of anchors, and an improvement was made by forming them with teeth, to dig themselves into the bottom. It is the iconic shape most familiar to non-sailors. This form has been used since antique times. The Roman ships from the 1st century used this form.

"Admiralty" consists of a central shank with a ring or shackle for attaching the rode (the rope, chain, or cable connecting the ship and the anchor). At the other end of the shank there are two arms, carrying the flukes, while the stock is mounted to the shackle end, at ninety degrees to the arms. When the anchor lands on the bottom, it will generally fall over with the arms parallel to the seabed. As a strain comes onto the rode, the stock will dig into the bottom, canting the anchor until one of the flukes catches and digs into the bottom.

A traditional design, the grapnel is merely a shank with four or more tines. It has a benefit in that, no matter how it reaches the bottom, one or more tines will be aimed to set. In coral, or rock, it is often able to set quickly by hooking into the structure, but may be more difficult to retrieve. A grapnel is often quite light, and may have additional uses as a tool to recover gear lost overboard. Its weight also makes it relatively easy to move and carry, however its shape is generally not very compact and it may be awkward to stow unless a collapsing model is used. Grapnels rarely have enough fluke area to develop much hold in sand, clay, or mud. It is not unknown for the anchor to foul on its own rode, or to foul the tines with refuse from the bottom, preventing it from digging in. On the other hand, it is quite possible for this anchor to find such a good hook that, without a trip line from the crown, it is impossible to retrieve.

Designed by yacht designer L. Francis Herreshoff, this is essentially the same pattern as an admiralty anchor, albeit with small diamond-shaped flukes or palms. The novelty of the design lay in the means by which it could be broken down into three pieces for stowage. In use, it still presents all the issues of the admiralty pattern anchor.

Originally designed as a lightweight anchor for seaplanes, this design consists of two plough-like blades mounted to a shank, with a folding stock crossing through the crown of the anchor.

Many manufacturers produce a plough-type anchor, so-named after its resemblance to an agricultural plough. All such anchors are copied from the original CQR "secure", a 1933 design patented in the UK by mathematician Geoffrey Ingram Taylor. Plough anchors stow conveniently in a roller at the bow, and have been popular with cruising sailors and private boaters. Ploughs are generally good in all types of seafloor, though not exceptional in any. Contrary to popular belief, the CQR's hinged shank is not to allow the anchor to turn with direction changes rather than breaking out, but actually to prevent the shank's weight from disrupting the fluke's orientation while setting. The hinge can wear out and may trap a sailor's fingers. Some later plough anchors have a rigid shank, such as the Lewmar's "Delta".

The Delta was developed in the 1980s for commercialization by British marine manufacturer Simpson Lawrence. It is a plough anchor with a rigid, arched shank. It is described as self-launching because it can be dropped from a bow roller simply by paying out the rode, without manual assistance.

American Richard Danforth invented the Danforth pattern in the 1940s for use aboard landing craft. It uses a stock at the crown to which two large flat triangular flukes are attached. The stock is hinged so the flukes can orient toward the bottom (and on some designs may be adjusted for an optimal angle depending on the bottom type). Tripping palms at the crown act to tip the flukes into the seabed. The design is a burying variety, and once well set can develop high resistance. Its lightweight and compact flat design make it easy to retrieve and relatively easy to store; some anchor rollers and hawsepipes can accommodate a fluke-style anchor.

A Danforth will not usually penetrate or hold in gravel or weeds. In boulders and coral it may hold by acting as a hook. If there is much current, or if the vessel is moving while dropping the anchor, it may "kite" or "skate" over the bottom due to the large fluke area acting as a sail or wing.

This claw-shaped anchor was designed by Peter Bruce from the Isle of Man in the 1970s. Bruce gained his early reputation from the production of large-scale commercial anchors for ships and fixed installations such as oil rigs. The Bruce and its copies, known generically as "claws", have been adopted on smaller boats (partly because they stow easily on a bow roller) but they are most effective in larger sizes. It was intended to address some of the problems of the only general-purpose option then available, the plough. Claw-types do not always set quickly in most seabeds, but they have the reputation of not breaking out with tide or wind changes, instead slowly turning in the bottom to align with the force. Bruce anchors can have difficulty penetrating weedy bottoms and grass. They offer a fairly low holding-power-to-weight ratio and generally have to be oversized to compete with newer types. On the other hand, they have a reasonable reputation in boulder seafloors, and they perform relatively well with low rode scopes. They cannot be used with hawsepipes. Many yachtsmen are abandoning the Bruce in favour of more efficient modern anchors, such as the Ultra and the Vulcan.

How to choose an appropriate anchor and rope (chain)

The weight of an anchor should be 1-1.5 kg on one meter of your boat length . So if you have a boat that measures 10 meters your anchor weight should be 10 - 15 kg. The anchoring rope or chain should be at least 4 times as long as the depth where we are anchoring. We should select the type of anchor according to the bottom type.